Click here to learn more about our financial professionals by visiting FINRA's BrokerCheck.

The Story of Sandy and Betsey Venitt

The story of Sandy and Betsey Venitt is a story filled with change, new starts and commitment. 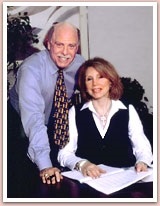 Sandy Venitt knows how suddenly life can change. When he was injured in a near-fatal auto accident in 1992, he didn't know if he would be able to walk again. It took courage, perseverance, and the support of his wife, Betsey, to get him back on his feet. They were both thankful that they had planned ahead, and had insurance to cover any outcome. As a successful financial advisor who knows firsthand the value of planning, Sandy's number one priority is to secure the financial future of his clients.
Betsey Venitt is also no stranger to change. She left a successful management career at one of the largest retail stores in America to begin a new career, in partnership with her husband as a financial advisor. Her managerial and people skills translate well, and with over 25 years experience in business management, she sees the relationship with their clients as a partnership. 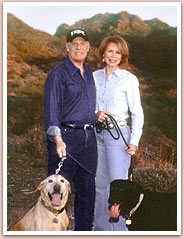 Sandy and Betsey are active in dog rescue, and have adopted and helped place many dogs over the years. The Venitts believe adoption, not euthanasia, is the best and most humane solution to animal overpopulation.

Sandy grew up in the resort town of Long Beach, Long Island, and then in Tarrytown in New York's Westchester County. He met Betsey when he was working as a retail buyer for an Atlanta department store chain in the mid 1970s. As the decade went on, he decided to change careers and transition from the retail industry to financial services. Initially, he worked for the major brokerages, but he found that client service was taking a back seat to trading and transactions. He decided what he really wanted to do was to advise business owners - personally, objectively, and in an ongoing financial relationship designed to keep them on target.
Away from work, Sandy likes to target shoot to relax. In the community, he was a Valley Big Brother for five years, and served on the Board of the Council for Jews with Special Needs for three years.
Betsey was one of the first women to graduate from the University of Georgia's Business School, and became the first woman salesperson for the largest fashion jewelry company in New York, and the first female store manager for Broadway Southwest in Arizona. After a long career in retail management, she felt compelled to pursue a new opportunity, and she was glad to discover the most satisfying career she had known. She is the Managing Field Associate for the Venitts' business. She is also an active volunteer at the Heard Museum.
Ultimately, the Venitts' greatest satisfaction comes from helping clients achieve their goals. E-mail them today if you'd like them to help you achieve yours.